Esther Reithoffer Dartigue was born in the town of Vizakna, in the Transylvanian Alps of Hungary, and came to the U.S. at age five. The family settled in Cleveland, Ohio, where it soon fell into poverty. She left home at the age of 11 to pursue her secondary-school education and beyond, supporting herself as a domestic. She earned her bachelor’s degree in literature and education at Wooster College, Ohio, and her master’s in rural education at Columbia University’s Teachers College, where she met her husband, Haitian-born Maurice Dartigue. They married in 1931.

She then embarked on a fifteen-year adventure in Haiti, where she was founder/ director of an American-style nursery school and kindergarten known as L’Ecole Moderne; served as a Board member of the Fondation Vincent and as Director of Thorland, a highly successful leisure club benefiting a charity (La Saline, a boarding school to train poor girls to become skilled maids); and was a member of the Steering Committee of the Association to aid the Maternity Hospital. She introduced girls’ basketball and volleyball to Haiti and was a founding member of La Ligue Feminine d’Action Sociale (The Women’s League of Social Action), the first feminist organization in Haiti (although she didn’t stay with it long). 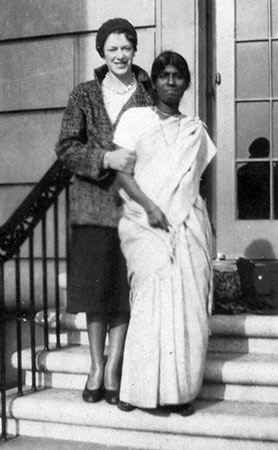 A regime change in 1946 forced the family to leave the country, and they settled in Great Neck, outside of New York on Long Island. During the next nine years, Esther held various positions: instructor at the United Nations International Nursery School in Lake Success, teacher and supervisor at Mills College of Education in Manhattan, and director of several nursery schools in Great Neck. She was also a founding member of the United Nations Women’s Guild.

This period was followed, in 1956, by nearly fifty years—the rest of her life—in Paris, where for the first decade she was the Director of the United Nations Nursery School and in time became a spokesperson for and specialist in bilingualism and international nursery schools. She was a member of such organizations as OMEP (World Organization for Early Childhood Education), AFFDU (French Association of University Women), IPA (International Playground Association), AFH (Association France-Haïti), and UCA (UNESCO Community Association). She is the author of seven magazine articles on bilingualism in an international nursery school setting, as well as of two books on her husband’s career: Un Haïtien exceptionnel Maurice Dartigue (1992) and An Outstanding Haitian, Maurice Dartigue (1994). She is the co-author and subject of a third book titled Forging Ahead: Recollections of the Life and Times of Esther Dartigue, issued in 2013. She passed away in Paris in 2003.